The Yankees backed by a strong start from C.C Sabathia and strong game from the offense won the 2nd game of this series against the AL East rivals.

With the team in need of a win, C.C carried the team on his back last night, inducing weak contact from the Red Sox lineup all night. He pitched 8 strong innings with 5 strikeouts, no walks and only 5 hits allowed.

With Hicks moving to the 2 spot and Sanchez moving down the lineup, the top of the order had a rough night. They went 1 for 13 with 2 walks.

Didi went deep in the 3rd, but the star of the offense was Chris Carter who went deep for the 2nd game in a row. He also had 2 other hits including a long single off the green monster in the 8th.

Jonathan Holder finished up what was a rare stress free game for the Yankees against the Sox, an 8-0 win. The teams will be going at it tonight in the rubber game.

Chad Green gave the offense a chance to catch up with 3.1 scoreless innings with 5 strikeouts, but the damage was already done.

All starters but Sanchez reached base, with Judge and Hicks doing it 3 times a piece while Didi did so 2 times.

Chris Carter might have bought himself an other start at first, with a solo home run in the 5th inning. He also hit a liner right at 3rd base in the 2nd and got robbed of a hit by a diving Sandoval in the 7th.

Aaron Judge had an other good game, with 2 hits (including a double) and a walk. He was the tying run when he batted with 2 outs in the 9th inning against Kimbrel, who struck him out. The Red Sox closer was very sharp striking out 5 batters for the 4 out save (Gregorius reached first on a dropped 3rd strike in the 8th).

The end result is a 5-4 loss, with both team going again at it tonight. The Sox are now closer than ever to the Yankees in the AL East race been only 1 game behind. 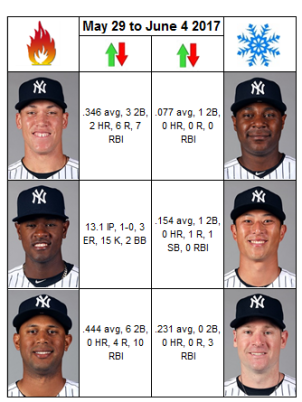